Firefly in My Garden 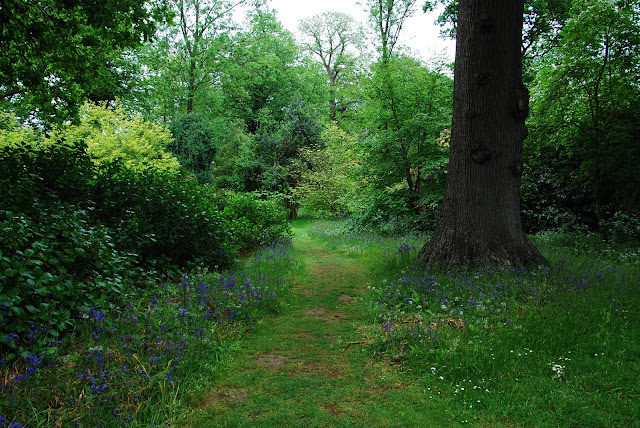 See where at intervals the firefly's spark Glimmers, and melts into the fragrant dark; Gilds a leaf's edge one happy instant, then Leaves darkness all a mystery again!

Of the millions of insect species, none has captured the world’s imagination like the firefly.   When young, I often saw them in fields, near woods or streams, when dusk was nearing darkness, a burst of light, then another and another, appearing and reappearing, bright for a moment then gone like a falling star.

Found throughout the world, sometimes in immense numbers, in fascinating displays, they exhibit marvelous behavior.  Here is a scene from a firefly hunt in New South Wales in Australia:

Down into the grasses on the bank, and there, in the delicate moment before the last light goes, were fireflies, gliding out over the water, in low arcs like the sweep of the grasses. On down the river, and on and on, were fireflies, lines of them wavering out from this bank and the other and back again, sketching their uncertain tracks of light down close to the surface of the water, hidden from outside by the grasses. In the last moment of light, with the darkness creeping up from the water and the moving plumes of grass still faintly outlined, there, far as the river stretched – an infinite number of little lines in two long rows on either side, quiet, unearthly. 1

In Southeast Asia and in the Great Smokey Mountains in Tennessee,  some species exhibit flash synchrony  - they light up in synchronized fashion.  An observer says:

These bugs "start up" in mid June at 10 p.m. nightly. They exhibit 6 seconds of total darkness; then in perfect synchrony, thousands light up 6 rapid times in a 3 second period before all going dark for 6 more seconds. . . .It is beautiful 2

An observer from Thailand writes:

Thousands of fireflies fill the branches of trees along the Mae Klong River here, flashing on and off in unison - relentless and silent, two times a second, deep into the night.   Nobody knows why. 3

The firefly has found its way into literature and poetry. One person compiled a list  of literary references to fireflies totalling 47 books, 11 magazine articles and 1 play. 4

Go to Amazon.com and put in “Fireflies in children’s literature” and you will get a long list of books,  written to delight, inform and inspire children.

The firefly  is not a fly, but a beetle, of the Order Coleoptera.  Its off-and-on bioluminescence is from the substance Luciferin on its abdomen, used by males and females in flash patterns to attract the opposite sex.  Its larvae, the glowworm,  produces light to warn predators that glowworms are not good eating.   The adult feeds on nectar and pollen; the predacious larvae dines on earthworms, snails and slugs, detecting the slime trail of the snail and slug and following it to the prey.

Sadly, fireflies are disappearing everywhere; the meadows, fields, ponds and creek edges where it once thrived are being destroyed by development, its ancient mating rituals disrupted by lights from developments:

Preecha Jiabyu used to take tourists on a rowboat to see the banks of the Mae Klong River aglow with thousands of fireflies.

These days, all he sees are the fluorescent lights of hotels, restaurants and highway

“The firefly populations have dropped 70 percent in the past three years”, said Preecha . . . . It’ sad.  They were a symbol of our city” 5

In July, 2008, a symposium in Thailand on “Diversity and Conservation of Fireflies” drew more than 100 entomologists and biologists who agreed that fireflies are a "canary in the coal mine", their decline could signal bigger problems ahead in the world ecosystem. 6

Surely we cannot afford to lose the firefly.  It “lights the way”  to an understanding  of the need to save all creatures.  We must not lose its beauty or its symbolism nor deny them to our children or our children’s children.  What can ordinary gardeners, do?  A blogger in Chicago provides an answer.   Her “habitat gardening” resulted in an annual increase in the firefly population in her yard;

First I have eliminated much lawn. Large areas of the garden have spaces of soil between the plantings which is covered only with decaying organic matter.

Wood piles and stumps are placed here and there to decompose. Abundant leaf mold and much compost is incorporated into shrub and woodland edge type planting areas. Most dormant plants are left intact for the winter and cut back only in spring.

We do not use any pesticides,herbicides or chemical fertilizers.

Most areas are dug once to prepare for planting then left undisturbed.

A good formula for all gardeners. 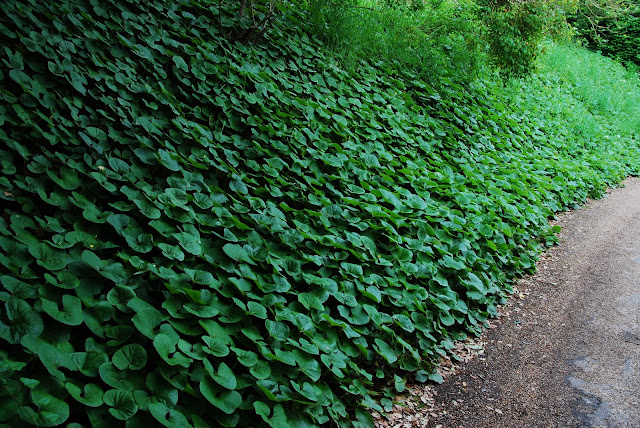 Scifri Videos: Bird In Hand To Save Those In The Bush

Scifri Videos: Bird In Hand To Save Those In The Bush

Bluebirds in the City

A flock of eight migrating Eastern bluebirds stopped over at my place this fall and stayed for about a month.  Unlike similar stays from various in-laws, the bluebirds were most welcome. Like the in-laws, the birds were apparently lured by decent food. While the in-laws finished up second helpings of goulash*, the birds dined on Cornus racemosa (Grey Dogwood) berries.  When the berries were devoured, they ate mealworms that I put out for them and when these were gone, the bluebirds left, presumably to fly south. 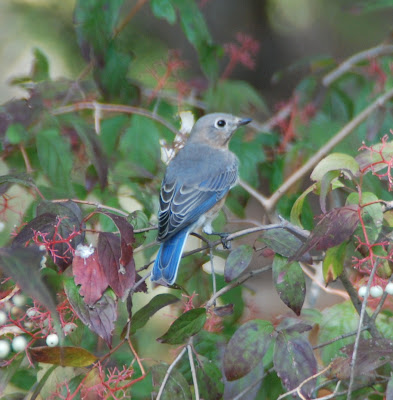 According to the Cornell Lab of Ornithology, the habitat of Eastern Bluebirds is in meadows and areas surrounded by trees and plantings that have nesting holes.  They are sighted along open areas, fields, roads, and golf courses.  My city home is in an older neighborhood consisting of smaller homes and ramblers on small lots with mature trees.  Across the street from my home is a lake with many birds including loons, herons, and egrets, but for the most part, my neighborhood does not match the description given by Cornell.

Because I am a professional gardener, my garden can be described as 'untidy' (think cobbler's children who have no shoes).  The merits of the 'untidy garden' is discussed in the previous blog.  I don't use pesticides or herbicides, and let plants re-seed freely.  In the course of my 13 years in this house, I have planted heavily with native shrubs, trees, and perennials.  I have many visiting pollinators, both insects and birds.

I assume that the bluebirds, on their way south, found a place to feed and rest before the continuation of their long migratory flight.  I feel fortunate to have had these beautiful birds in my back yard, but am disturbed by the relentless appetite of development that devours meadows and other habitat areas for bluebirds and countless other species and makes it necessary for them to search for food in such foreign places.

As a gardener, it is my obligation to design areas that are not only visually beautiful, but to retain and create habitat and food sources for wildlife.  My garden and landscape clients want their landscapes to be attractive to birds, butterflies, and other beneficial insects, but it is also important to them for the gardens to have a neat and tidy appearance.  Is it possible to have both?  YES!  How to make your 'untidy' garden appear 'tidy' will be the subject of a following blog.  Stay Tuned.

Posted by Gabby Gardener at 1:34 PM No comments: 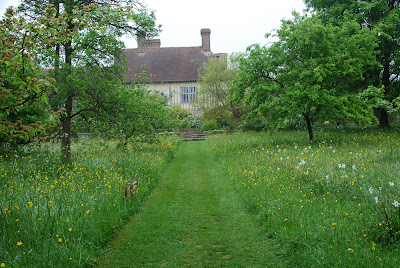 THE UNTIDY GARDEN
Behold! yon bordering fence of sallow-trees
Is fraught with flowers; the flowers are fraught with bees:
The busy bees, with a soft murmuring strain,
Invite to gentle sleep the labouring swain.
from Tityrus and Meliboeus, by Virgil
Dr. Ken Thompson, senior researcher at Sheffield University in England, says flat out that untidy gardens make the best habitat for wildlife, basing this on a study of biodiversity in town and city gardens in England.  They “offer a vital refuge for animals and plants - provided that those responsible for their upeep are not too fastidious as gardeners”.   “Britain’s 16 million gardens are a haven for hundreds of species of animals and plants that would find it impossible to survive on intensively farmed land”. [1]
To create an untidy garden he suggests we:
*Plant large shrubs and let them grow big. Shrubs and trees produce more vegetation where wildlife can live and eat.
*Allow at least some flowers to turn to seed and the lawn to grow tall. Don't be in a hurry to clear up fallen leaves.
*Create a pond for insects, frogs and toads. Think before stocking it with fish which will eat insect eggs and larvae.
*Don't illuminate your garden at night with bright lights. This will disturb many nocturnal creatures, such as moths.
*Create a compost heap – they are miniature nature reserves in themselves. Compost also enriches the soil.
America seems addicted to the too tidy garden and its companion, the American lawnscape,  its green carpeted lawn mowed, trimmed, watered within an inch of its life, doused with pesticides, secure against any intrusion of nature, until it has the look and all the wild natural charm of a pool table.  Valerie Blaine, columnist for the Daily Herald, calls  the American lawn “an ecologically unstable, chemically dependent monoculture of alien plants . . .  in which only one plant species grows, at the expense of anything and everything else.”
It's made of nonnative species ill-suited to our climate's precipitation. It's dependent on artificial precipitation - meaning that it must be watered regularly to stay alive. It's dependent on herbicides to keep any and every other species of plants from encroaching on the troops of turf grass. It's addicted to pesticides to keep viruses, fungi, and bacteria at bay. It's got to have fertilizers to ensure the greenest of greens.
. . . . There must be nary a weed, nor a blade out of place, nor a renegade weed. And one must not allow the grass to grow tall enough to flower. Flowers - a plant's way of reproducing sexually - are anathema to the lawn. [2]
Carol Rubin, a Canadian, was moved to take action when it was proposed to spray 2-4-D over her water supply and on an area adjacent to a salmon spawning stream.  She wrote a book entitled How to Get Your Lawn off Grass, or,
how we can conserve water and prevent its contamination by taking up our water-sucking turf grass lawns (and ornamental, exotic, garden plants) and replacing them with gorgeous native ground covers, flowers, shrubs, trees and grasses that need no fertilizers, chemical controls for pests, mowing, and after establishment, no water. [3]
Hear now the voice of Robert Frost, America’s pastoral poet, who wrote of nature with deep reverence.[4]
In Rose Pogonias, he tells of a small. lovely spot of nature,
A saturated meadow
Sun-shaped and jewel-small
A circle scarcely wider
Than the trees around were tall
Where winds were quite excluded
And the air was stifling sweet
With the breath of many flowers
A temple of the heat.
and his prayer that it might be permitted to survive.
We raised a simple prayer
Before we left the spot,
That in the general mowing
That place might be forgot;
Or if not all so favored,
Obtain such grace of hours,
That none should mow the grass there
While so confused with flowers.
[1] http://www.independent.co.uk/news/science/why-untidy-gardens-make-the-best-habitat-for-wildlife-1783396.html
[2] http://www.dailyherald.com/story/?id=318715  September 7, 2009
[3]  http://pcei.org/education/Lawnpr.pdf
[4] http://www.worsleyschool.net/socialarts/poemsofrobert/frost.html
Posted by Gabby Gardener at 3:21 PM No comments:

Exotic specie listening for your pleasure

http://alewifemusic.com/home.html
Posted by Gabby Gardener at 4:07 PM No comments:

Posted by Gabby Gardener at 3:32 PM No comments:

Posted by Gabby Gardener at 3:28 PM No comments:

CHICKEN OF THE WOODS or Laetiporus sulphureus

Found Sept 20th in Shoreview, MN at the base of an oak tree in a lawn. 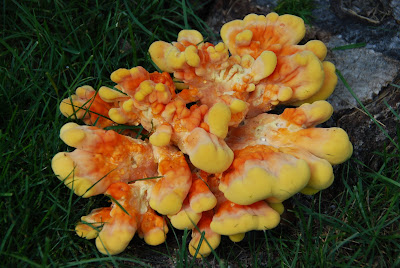