Landscape Fabric?  You talkin' to me?  Don't EVEN go there!

Since you bring it up, here are some facts about Landscape Fabric.

Landscape Fabric is made of Polypropylene, which is this:


The only thing that I know for sure is: LANDSCAPE FABRIC BITES THE BIG HOOTER. 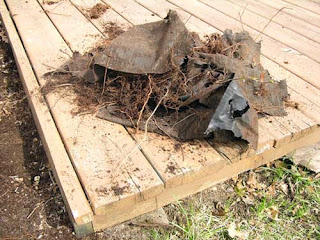 Except for some uses in the vegetable garden, and perhaps in some retaining wall construction, this crap has NO use in the landscape or garden.  The claim is that it "prevents weeds" and is better than plastic because it allows water and oxygen to get through.  Hmmmm......plastic or landscape fabric?  Which should I buy?  WHAT!  YOU DON'T NEED EITHER!  (Sorry, I digress, I'll talk about plastic another day.)

Although landscape fabric IS permeable, it in NO WAY keeps weeds out.

As any gardener worth their compost knows, most weeds come from airborne seeds.  Without soil disturbance, many weed seeds in the soil will not germinate, and regular mulching with organic mulches can ensure this.

If one chooses to go down the road to landscape fabric hell, here is one possible scenario that may be waiting:

So, ya put down your (expensive) landscape fabric with much difficulty, sweat, swearing, ect.  Then you cut little holes and put your plants in the soil.  Then you put some mulch (probably some hideous colored mulch) down which will probably either wash away, blow away, get moved around, add no nutrients to the soil, and will look crappy.  All is hunky dory! Wow!  A no maintenance landscape!  But Wait!!!  Here are some weeds!  Dang! The root is stuck in the fiber, and you pull up some fabric.   A few weeks pass.....more weeds....more fabric pulled up.  No worries mate!  I'll get the hoe!  Oops, that doesn't work, you can't cut the root because of the, arghhhh....landscape fabric!  Maybe if I add more plants, some annuals perhaps, there will be less room for weeds!  A great idea!  What? The shovel won't go down!  I have to cut little holes in the landscape fabric!  Will these plants ever spread? What have I done?  Dispair....Depression...Anger....

There are several possible endings to the scene:

a.  Wow!  I just read Gardening with Gabby and now know that I should have not used landscape fabric!  I'll remove it, add compost, lots of plants, and use organic non-colored mulch!

b.  The HELL with this gardening crap!  I'm going to pave everything!

c.  Maybe this colored mulch is not working, I'll put rock mulch over the landscape fabric!

d.  I'm going to consult a professional (gardener that is), meditate, do some yoga, take a sauna and flagellate with birch twigs, and have several shots of aquavit!

Polymer Schmolymer!  There is no need to choose one of these outcomes (although d is pretty appealing) if you don't go down that road paved with bad advice and landscape fabric.
Posted by Gabby Gardener at 4:47 PM No comments:

by Norm Aaseng, plant ecologist, Minnesota County Biological Survey. This is a summary of his talk at the Nov. 5, 2009, MNNPS meeting. 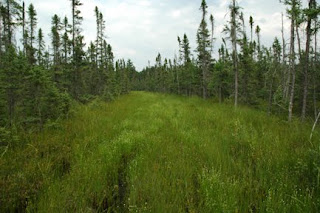 Decorative tree harvesting is the cutting of the top two to four feet of stunted (six- to 15-foot) black spruce trees. These spruce tops are shipped to garden stores and other outlets where they are sold as decorations during the winter holiday season. In the mid-1990s, the harvesting of spruce tops in Minnesota began to expand, and today an estimated one-half million to one million tree tops are harvested per year. Surveys indicate that there is a market for three times that number of spruce tops. Harvesting occurs primarily on state and county lands in northwest Aitkin, southwest St. Louis, northwest Carlton, and southwest Itasca counties from mid-September to mid-December. This activity provides income to local harvesters from lands that typically do not generate any revenue.
Although black spruce trees are found in a variety of peatland and upland native plant community classes, almost all decorative tops come from the Northern Spruce Bogs (APn80 in the DNR’s Field Guide to the Native Plant Communities of Minnesota). The Northern Spruce Bog is the most nutrient poor as well as the most acidic native plant community occurring in Minnesota. These conditions create a very inhospitable environment in which only 25 vascular plant species are adapted to survive. Typical species found in bogs include carnivorous plants, such as pitcher plant (Sarracenia purpurea), ericaceous shrubs, such as bog rosemary (Andromeda glaucophylla) and bog laurel (Kalmia polifolia), and graminoids such as cotton grasses
(Eriophorum spissum) and bog wiregrass sedge (Carex oligosperma). Hummocks of sphagnum moss cover the ground surface. The severe conditions are responsible for the stunted size and shape of black spruce trees desired by harvesters.
As tree-top harvesting operations increased in size, environmental impacts from harvesting became apparent. DNR Forestry assembled a field team to determine the impacts of tree-top harvesting and the factors contributing to the damage. The team found that the cutting of the spruce tops did not appear to have a significant impact. Tree tops were reported to grow back and be harvested in 10 - 20 years.
However, very significant impacts occurred from rutting on all-terrain vehicles (ATV) access trails. Initial passes by ATVs create a trail by compressing the sphagnum peat, but repeated traversing of trails, especially with heavy vehicles, resulted in cutting through the live root mat that occurs in the upper six inches of the peat. Once this mat is cut, the weight-bearing capacity of the peat is severely reduced, resulting in increasing size and depth of pools with every pass of an ATV. The deeper the ruts are, the longer it takes the vegetation to recover. If damage is significant, there can be a conversion of vegetation to marsh or even exotic plant species. Water tracks and laggs (shrubby wet moats occurring between the interface of peatland and upland) were found to be particularly susceptible to damage from ATVs. The creation of deep pools and the elimination of existing vegetation easily occurred along the ATV trails in these areas.
To minimize these impacts, the DNR instituted regulations that limited the depth and length of rutting allowed on trails as well as imposing restrictions on the access of harvest areas through laggs and water tracks.
Despite the regulations, some impacts continued to occur, primarily through “rogue” or inexperienced harvesters. Because public auction requires that the sale of tree tops go to the highest bidder regardless of competence of the harvesters, the DNR no longer offers this option for decorative harvesting. Instead, private sales are negotiated with proven operators that possess the appropriate equipment, such as low pressure-tired vehicles. Because these private sales are much smaller in size than public auctions, the DNR sales are now limited to a total of 200,000 tree tops per year. With increasing demand for spruce tops it may be that operations will be shifting to lands that are less regulated.
Harvesting of spruce
Posted by Gabby Gardener at 3:19 PM 2 comments:

Today, two of us from Green City Gardeners planted 1600 bulbs.  Damn, we're good.  In all modesty, I have found an efficient method that works better than anything else I have tried.  And I have been at this for a LONG time.  I have tried bulb planters, not practical for so many bulbs; augers and drills, only if the soil is perfectly soft and rock free (not typical); excavation of all soil, not good if you have existing perennials.

1.  Remove any annual plant material.  We have had such a weirdly warm season, that the annuals still look great!  So harden your heart and chop away.
2.  Loosen soil with garden fork.  Old-fashioned?  Maybe.  But very effective.


3.  Toss bulbs on top of bed.  Plant tightly for a fabulous spring show! 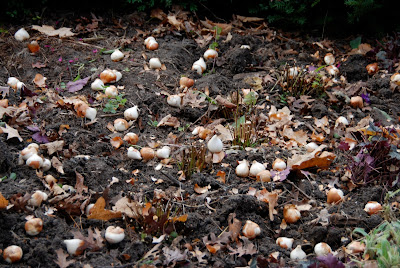 4.  For tulips, plant about 6" deep from top of bulb, plant pointy side up.  I use this great little hand shovel/knife.  Easy to dig since your soil is nice and loose. 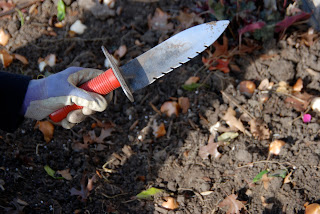 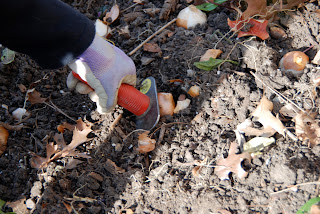 5.  Cover bed with a generous helping of chopped leaves. 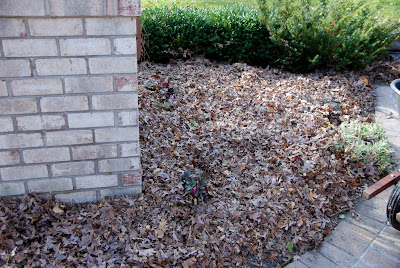 6.  Top leaves with compost, or very fine mulch (seen here), and don't forget to water in! 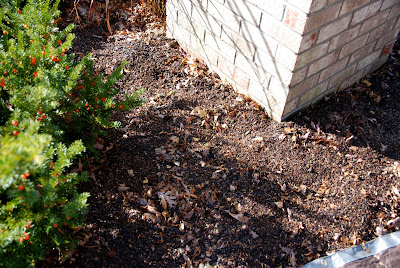 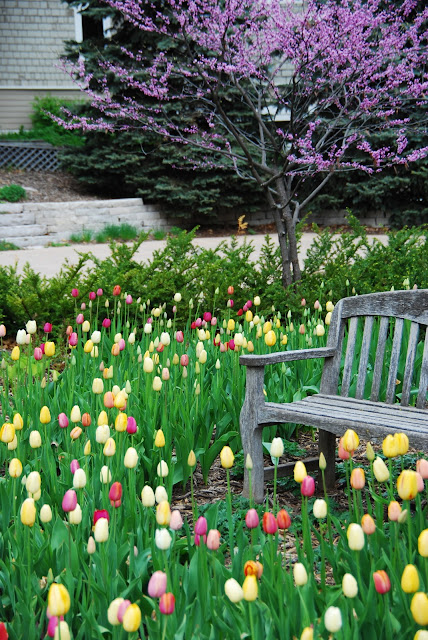 And Voila!  See what awaits you in the spring!
Posted by Gabby Gardener at 4:53 PM No comments:

Gabby is Getting CRANKY!!!

Gabby is getting cranky.  I have tried diplomacy, scientific facts, logic.  All to no end.  Why is Gabby getting cranky?  Because people keep putting leaves in bags!

Put your leaves on your garden beds.  You do not need to remove leaves.  They are delicious, nutritious, and FREE.

OK, I can't understand why you would need another reason to let your leaves be, but here's one:  Your gardens will suck big time if you remove your leaves.  Plants LOVE 'em!  Plants thrive on 'em! They are full of vitamins and minerals!  And talk about microbial activity!  Whoa, microbes a plenty!  Did someone say..."what about disease and fungus"?  I can't hear you!  Who told you that you're supposed to rake them off, put them in bags (preferably plastic) and pay to have them hauled off, then spend lots of money on fertilizer, mulch, and new plants  (because now your gardens suck)?  Gabby is telling you to leave them on.  And Gabby knows.

Gabby is no fun when she is cranky. 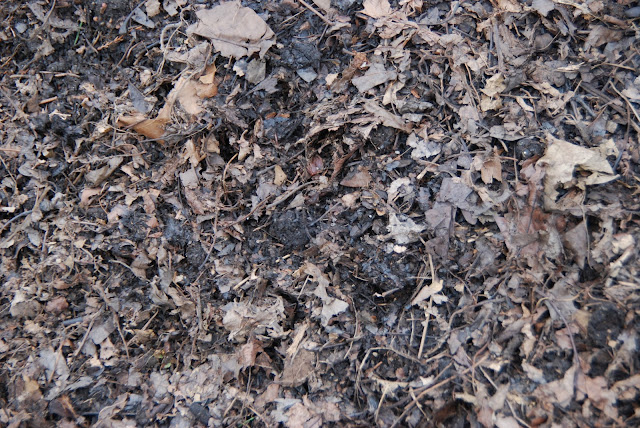 Selective Removal.  Sounds kind of surgical, but is my favorite method for autumn cut back.  Leaving plants up adds fall and winter interest, provides bird forage and shelter, and keeps the soil protected from winter temperature extremes and erosion.  Leaving plants up is generally more aesthetically pleasing than the severely chopped and roundy-moundy looks associated with total cut back.

Assess what plants will be in the way of paths, and what will be an eye-sore in the months to come, paying attention to main entryways and focal points, and take those plants back.  Leave the rest, and voila......you're finished!

Oh, and don't forget to leave the leaves on the gardens!!! 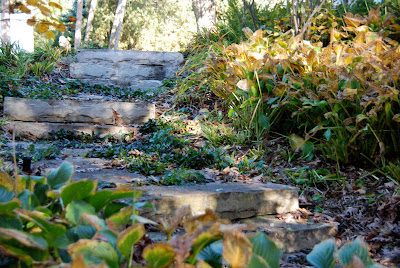 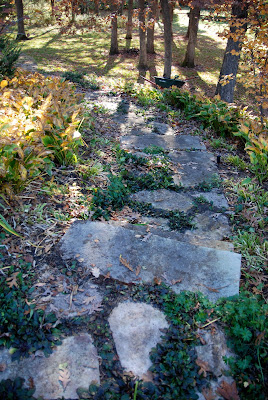